Large bridal parties can be incredibly tricky.  Photo timelines are tight on a wedding day anyways and then you throw in posing 15 plus people and it definitely adds another layer of stress.  When I first stated shooting weddings I dreaded the bridal party shots…because I had no idea what to do.  I had no idea how to get people to look the way I wanted them to look and I most definitely didn’t know how to handle larger groups.  But along the way I picked up a few tips that really helped me take control of those situations and actually come to enjoy it.  When a bride and groom pick their wedding party…no matter how many people it is…they pick those people because they are the most important people in the world to them.  So it is up to us…as the people they chose to document the most important day of their lives…to be able to photograph all those people beautifully.  No matter how many people that may be…

Here are a few tips that have helped me stay in control and produce an end product I am proud of.

1. Find an open space and/or use a wide lens

When I know there is going to be a large bridal party…I always look for the most wide open space possible.  I love shooting with my 50mm…so if possible I find a place that is big enough for me to pose the bridal party and also back up far enough.  Now I realize open areas aren’t always available (ie: if you are shooting in a city or indoors where space is very limited) so in that case I shoot with a wider lens.  I still back up as far as possible to prevent distortion…but sometimes that isn’t far enough for the 50mm.  It’s important to be prepared for whatever situation you may be presented with. 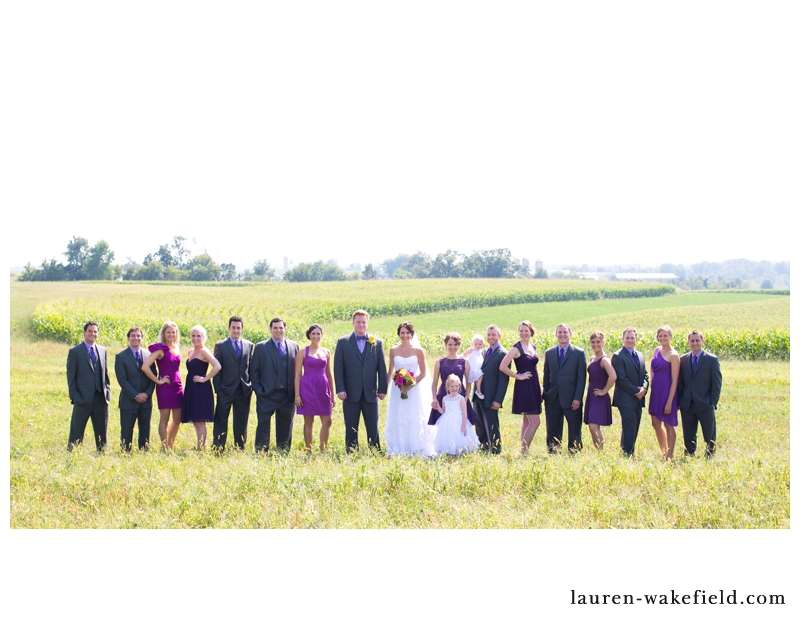 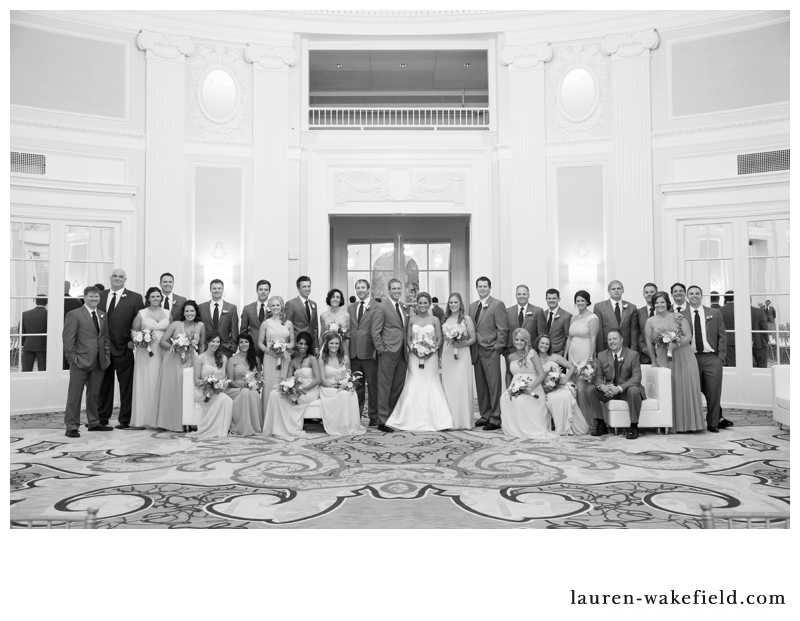 It’s so easy when there are a lot of people to just tell everyone to stand the same way and look at the camera and smile.  But that’s the safe shot.  I always ask my brides ahead of time how many people are in her bridal party so I know how much time to allot for bridal party photos.  A 6 person bridal party is going to take far less time than a 30 person bridal party.  But when I know that ahead of time I can make time for it.  And when I have time…I can take the extra few minutes to give direction and pose each person. 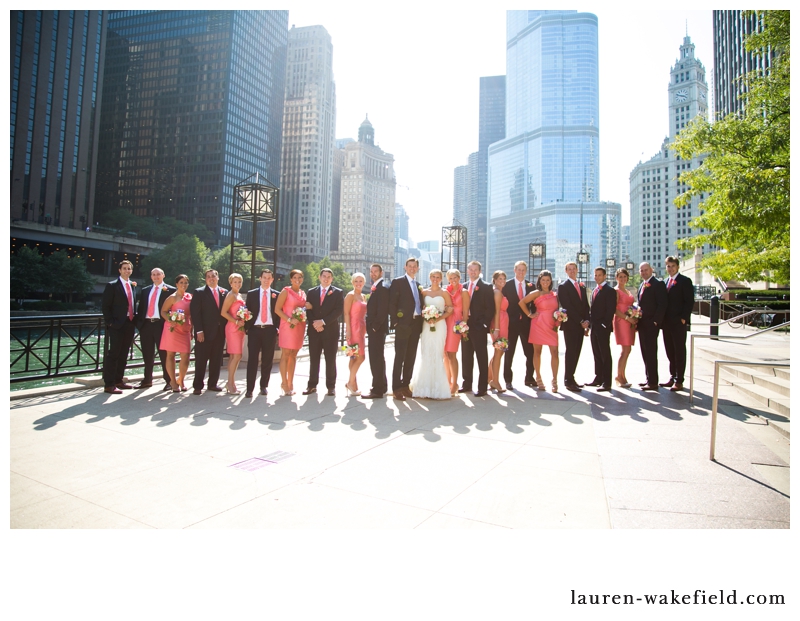 You may be thinking…“Great! You said give direction but what does that mean?!?!”  When I’m posing a bridal party I always think about two things…contrast and depth.  By contrast I mean up and down and by depth I mean in and out.  For instance…if the bride is holding her bouquet at her waist, I will have the bridesmaid next to her hold her bouquet down at her side.  Up and down…which is contrast.  Another example of contrast is sitting vs. standing.  I always look for ways to have some of the bridal party sitting or leaning on something to create contrast in height.  If one groomsmen has his shoulders square to me…I will have the bridesmaid turn towards that groomsmen so she is facing profile to the camera.  The groomsmen may be standing back a little bit while the bridesmaid is slightly in front of him.  In and out…which is depth.  This may sound confusing but below are a few examples to help you understand.  Pay attention to the direction of their bodies and what their arms are doing.  Where are the groomsmen’s hand?  Where are the bouquets?  What foot is their weight on?  It’s little details like this that make such a huge difference and are so easy to direct.

The full length bridal party shot is so important.  But so are the little in-between moments.  This is more of a job for your second shooter but as the primary shooter it is still your responsibility.  While you are busy setting up the large group shot (which takes a little bit of time with a lot of people) have your second shooter grabbing candids and close-ups.  Shots of bridesmaids laughing and bouquets.  Because as important as that wide shot is…more times than not it’s those little moments that the bride will fall in love with.  And as silly as it sounds…always always get the “girlfriend” shot.  That close-up shot of the girls with all their arms around each other with the biggest smiles on their faces.  Ultimately…that photo will mean more to a bride than anything else.

I hope this was helpful and made at least a little bit of sense.  If you have any questions at all don’t hesitate to email me!  I’m always happy to help!