Posted in For Photographers5 comments

Over the years my business has evolved.  It is constantly changing into the next phase and becoming more and more of what I’ve always dreamt it to be.  And there have definitely been challenges along the way.  When I started…I was desperate to book weddings.  Anyone who is in the beginning stages of their career knows how hard it is to get that momentum going.  Back then…that was all I could focus on.  Who was getting married and who would put their faith in me to capture their day.  From there it went to booking clients that I whole-heartedly love.  Figuring out this whole full time thing.  And now teaching.  I used to think I wanted to be a big-time speaker at WPPI or some other conference and stand up in front of hundreds of people and talk about god knows what.  But just like everything else…that has changed dramatically.  I know that what I have to give others is not up on a stage…and also I think I would pass out immediately from stage fright.

After I realized conferences weren’t for me I wasn’t really sure where to go from there.  Earlier this summer a friend of mine asked me to do a mentoring session.  I had never done a mentoring session before and honestly I had no clue why she wanted me to help her.  If I’m being completely honest…there is a lot of the time I feel like I have absolutely no clue what I’m doing.  And I was sure if I did this mentoring session she would figure me out.  But I put my own insecurities aside and agreed to help her however I could.  We spent two days together and as I hugged her goodbye I could see the change in her.  I could see the lightbulb that had went on and I was the one who turned the switch.   Going in, I had no idea what I could teach her.  What I could give her that would help move her forward.  But during those two days I gave her everything I had.  I helped in every way I could and took her hopes and dreams and pushed her towards making them a reality.  It was one of the most fulfilling experiences I have ever had and that is when I knew this was my next step.

Mentoring sessions.  One on one time to help other photographers in any and every way I can.  I’m not and never will be a “big-time speaker”…and I don’t want to be.  I know there are just as many people out there that I can help in my own way…over lots of coffee.  Topped off with a glass of wine.  So today I am making it official.  As of today I am officially offering mentoring sessions.  I have no idea where this will lead…but I know it’s a step in the direction I was meant to go. 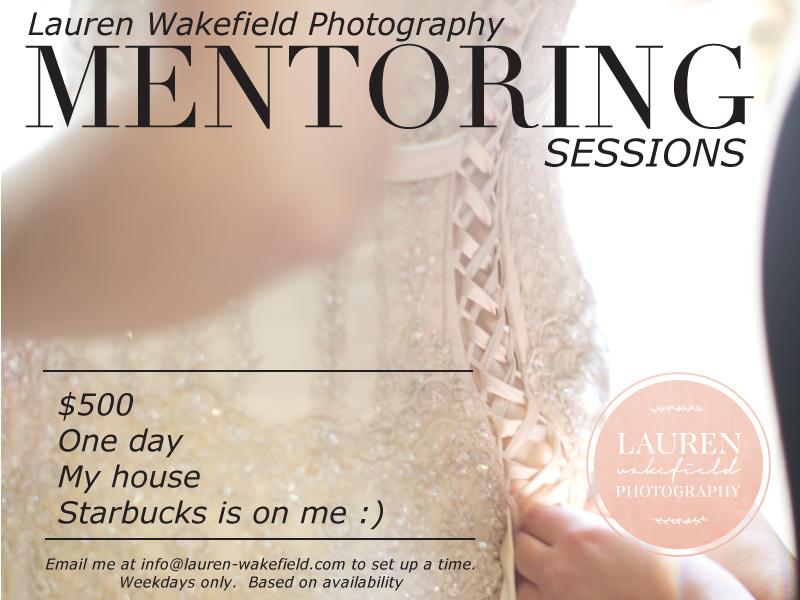